T Minus 7 Days (and an Upcoming Give-Away!)

This past Friday I had the honor of meeting up with fellow San Francisco runner/blogger RoadBunner to talk all-things running. (No, really, we seriously only talked about running. Everyone seated around us at the restaurant left because they got tired of us nerding out about tempo runs, hill repeats, and doing speedwork in the city.) Regardless, I have to say that this was one of the most engaging conversations I've had in a while, and I'm glad we found time to meet up! (Thanks for saving me from a bike ride home in the rain, too, RoadBunner!)
RoadBunner is a truly motivated and contagiously persistent marathoner, running 15 marathons in 2010 alone, because the other 9 she had under her belt from previous years obviously wasn't enough. She also runs plenty of half marathons in the Bay Area and is well-versed in the U.S. Half Marathon, which, by the sound of things, is a half marathon she does "for fun" and "as a favor to Ron" (who kindly introduced us). Additionally, anyone who runs what she describes as the "hardest half marathon course ever" -- and repeatedly -- is someone who has a brain I'm eagerly willing to pick away at.

Apparently the U.S. Half Marathon course has even more hills than I'm imagining (and in my mind, I really couldn't imagine many more). I've been running plenty of long, gradual uphills as well as a number of short, steep hills, but it sounds like the course has way too many massive hills spread all throughout the course. I guess there is one evil hill that runners go up, then back down, only to go right back up, just so race directors and spectators can have a good laugh. I wanted to hear that this course isn't as scary as it sounds, but no such luck. After talking with RoadBunner, I knew I needed to get in one more solid long run with some major hills to bring my confidence up before next weekend. After our dinner on Friday, I went home, chugged a beer, woke up to a rainy Saturday morning, and hit it.
According to RoadBunner, the U.S. Half Marathon course does not block off a lane of traffic on the Golden Gate Bridge. This was terrible news, because not only am I afraid of falling off the side of the bridge, I'm downright afraid of being on the bridge. The first obstacle on my Saturday long run was to run up to the bridge and then over it. Luckily, not many tourists were out since it was raining, so I got over and across the bridge in a couple of minutes. Not much dodging and weaving here. 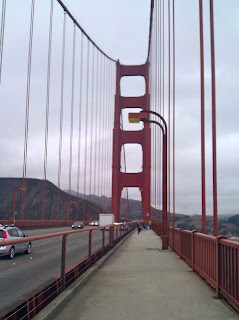 Okay, so I have a different new phone (don't ask), and apparently I can't hold the video recorder correctly on this one either.

Notice me running on the left-hand side of the pedestrian lane because I'm too afraid of the ledge. Let's hope it'll work out this way -- and will be this empty -- next weekend.

At points during my run across the bridge, I couldn't even see the city through the rain clouds.
Alcatraz Island and the city, I think. 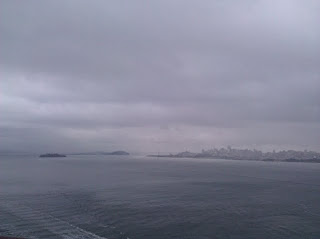 The next obstacle on my hilly long run was to, uhhh, keep running steep hills, so I continued on through the Presidio.

The clouds parting over the ocean. 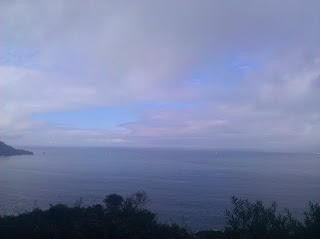 The sun trying to peek out over the Richmond District. 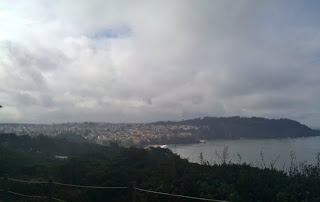 I then made my way through Golden Gate Park back up to the Presidio, only to see a glimpse of the bridge mocking me through the trees.

We shall meet again next weekend, Scary Bridge. 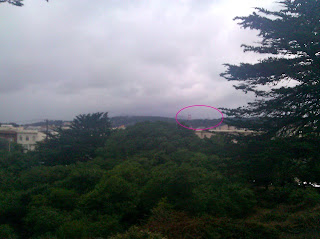 I ended up finishing today's 13.1-mile training run just 20 seconds short of my PR. I'm chalking it up to a Garmin fluke, since apparently I ran below sea level while I was on the bridge.

And I guess I jumped over a mesa while I was at it.

Regardless of what my watch said about my training run, I now know that if I have an on-day, next weekend's race could be awesome. If I have an off-day, this could be the suckiest thing I've ever done. Based on the long runs I've actually completed, I could seriously flip a coin as to what is going to happen next weekend.
Now, onto the details you're really reading this for: I'm having my very first give-away after the U.S. Half Marathon next weekend! I meant to do this after I hit 50 followers (When did I get to 54 + a bunch of lurkers??!), but I've been a little side-tracked. Details to come after the hardest half marathon I'll ever run...

Not Running and Running

I realize now that another fun part of living in a destination city is that people actually want to come visit you there. I'm coming off of two straight weeks of visitors, and not only has my blogging taken a hit, so has my running.
My second visitor left earlier this week, and while she and I were able to fit in a few hikes and I did get in some short runs while she was asleep, I was no where near running all my training miles. Last weekend called for a long run of 1:45 hours at 3/1 difficulty, and I managed to squeak out a 7-mile tempo run in 58 minutes before feeling bad for keeping her waiting.
Aside from not doing enough running, I also ate way too much junk. Normally I'm not too picky about what I eat as long as it's vegan and I'm getting all my food group servings, but when this girlfriend and I are together, we become an unstoppable team of gluttonous vegan cupcakes, doughnuts, cookies, and candy eaters. It was amazing.
Right after my friend left, Fleet Week popped into town. Downtown has been packed with Giants hooligans and tons of adorable Navy hotties. Everyone who knows me even the slightest knows that I hate flying, yet I love airplanes and the idea of flight -- so the past few days have been awesome. However, again, I spent less time running, and more time watching the Blue Angels.
The view from the office. 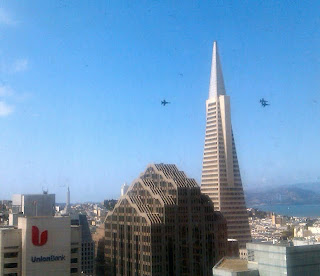 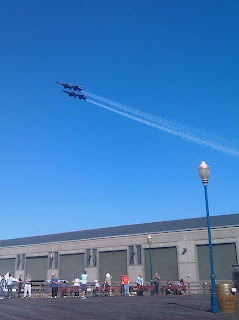 I'm still learning my new phone's video recorder, so apologies for not holding this the right way. 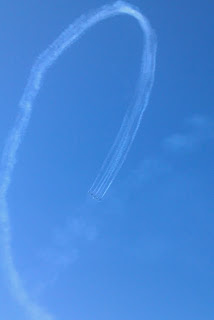 This morning I headed out for the second 1:45-hour long run my training program requires of me, and as I started, I felt insanely guilty that the whole time I've been in the city, I haven't actually finished many long runs successfully. The hills have killed my endurance and I have barely fit in a handful of 10-milers. Since moving here, I find myself needing to stop and walk much more than I'm used to. I knew I'd probably cover 11 miles on my route today if I stuck to a flat course, and I told myself if I were dying at the end of it, I would stop ... but I had to get to 1:45 first. If I still felt good at that time marker, I was going to make myself do the full 13.1 to prove I can still cover the half-marathon distance. To make this more clear: I have been doubting my ability to run the U.S. Half Marathon well, simply because of the hills.

I planned out a tentative route that had plenty of water stops, and I also made my route include a couple long, gradual uphills, but nothing too steep. Of course, in this city, steep hills are still inevitable, and I had planned most of them to be in the first half of my run. Once I hit the slow and sluggish 1-hour mark (just a hair over 6 miles), I felt much stronger than when I started.

I finished a full 13.1 today -- the first time since the July 4th Red, White & Boom half marathon I did with my friends Julie and Pablo, and after some semi-serious health issues I had earlier this summer -- and I did so just 6 minutes shy of my personal best. I did this while taking two walk breaks, two picture breaks, and a number of stops at water fountains. I finally feel like if I get in some more solid steep hill practice before next month's race, I might be able to match, if not beat, my PR in the distance. Maybe I need to have more visitors, cupcakes, and Blue Angels to distract me... 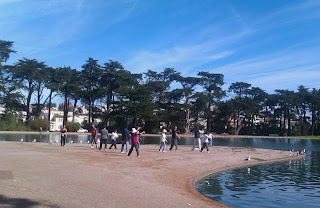 Hello gorgeous. Nope, still not tired of you. 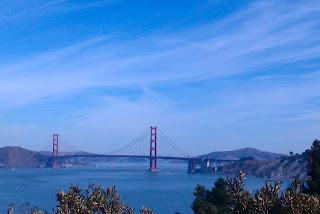