This year I had a different approach to training for the San Francisco Marathon (aka the very best road race of all time. You all should run it.).

Previous preparations for this race have included multiple 20+ mile training runs, not as many weekday miles, lots of solo running, and too much pounding the pavement on the actual course. As a result, I've left this typically-cold summer race feeling burned out and trying to garner excitement for a fall race.

But this year was different. Coming off of a love I've developed for trails -- and a balance I've found from running with friends almost every morning -- I wasn't ready to give that up for serious road training.

My training approach
I decided to take a page from the Hanson's Marathon Method. While I didn't follow the plan to a T -- in fact, some might argue I followed it at all (more on that later, if anyone out there actually reads this & is curious) -- I got good at skipping the uber-long runs on the weekends. Fresh off my 50k and back-to-back weekend long runs, I was excited to have my weekends back. So, I upped my weekday mileage by running double days, plenty of double-digits runs, and also sprinkling in speedwork, tempo, & progression runs. But I was still hitting 75% of my miles slowly, on the trails, with some of my favorite ladiez. On the weekends I didn't do a whole bunch except live life. It's just the balance I need right now.

So for this race, I did one slow marathon as a long run (see also: Big Sur Marathon) and two 16 milers. Granted, I did plenty of double days that amounted to 16+ miles in a day, but only three nonstop long runs. I also ran Bay to Breakers again this year, trotted through a few trail races, and sprinted smaller 5 and 10ks that I counted as speedwork.


Team Skittles + a Tiger at Bay to Breakers. 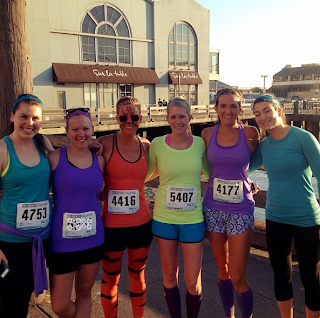 Few laps of the DSE 6-Hour with Mike. 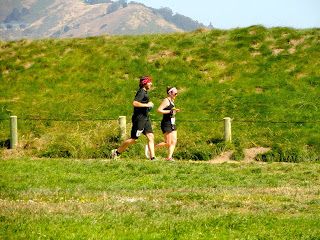 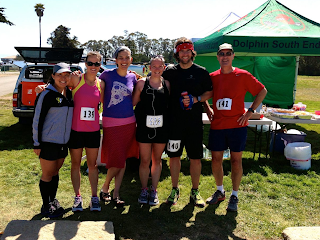 I was finally and consistently hitting 50+ mile weeks (which, for me, is A LOT!) despite the lack of weekend runs. As a result, I really had no clue what all of this would translate to in a hilly road marathon.

And that's when Dennis and Jess stepped in.

Team Awesome
Dennis is a freaky-fast 26x marathoner. He has that "problem" where, when he commits to something, he does it 100%. This is normally not a bad thing, until you think about how he approaches so many marathons: Race every single one all-out despite heat, terrain, altitude, injuries, and other factors that typically & rightfully slow one down. And then he doesn't recover, and he does it all again.

So when he sent out a message asking if anyone wanted a "pacer" at the San Francisco Marathon because he wanted to have a casual marathon for once, I jumped onboard. Shortly thereafter, Jess (also one of the fastest marathoners I know) said she wanted to join us because she was going for the 52 Club at SFM (1st half one year, 2nd half another year, full marathon the final year) and wanted to take it easy.

And then, Team Awesome Does SFM was born. 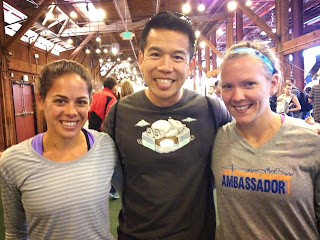 But there was just one problem: I didn't know what I wanted them to pace me at.

My background with the race/Goals:
The first time I ran SFM (in 2011) I ran it in 3:44. I don't know where that came from, but it was a beautiful day for me and an 11-minute PR at the time. The second time I ran SFM (2012), I did it as part of an unintentional 3-marathons-in-3-months streak. I kept it casual as it was the final in my streak, finishing in 3:49. This year -- with it being nearly a FULL YEAR since I ran a sub-4 marathon -- I decided my sandbag goal would be at least a sub-4 to keep my tradition going. I knew, without an injury and some decent paces I was hitting during speedwork, a sub-4 on this course should have been possible.

As a team, we decided to aim for a course PR. And because SFM typically runs long thanks to hills, turns, & shady satellite signals downtown, we adjusted the goal pace to be 8:30 minute/mile overall. The plan was to go out slow on the hills (a little more than the first half), and then pick it up around mile 16 when the hardest part was behind us.

The race
At 5:32 a.m. Sunday morning, Jess, Dennis, & I took off down the Embarcadero toward the Marina. Feeling fresh, we powered past the piers and up the Fort Mason hill with ease. I had warned them that an 8:30 pace is not really a conversational pace for me anymore, especially for 4 hours, so I might not do a lot of talking. They were cool with this, and I just listened to them tell stories while interjecting where I could.


Team Awesome at the start. 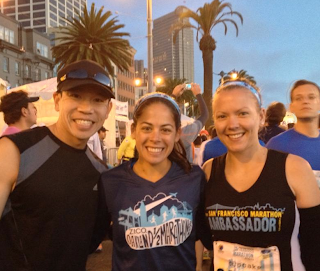 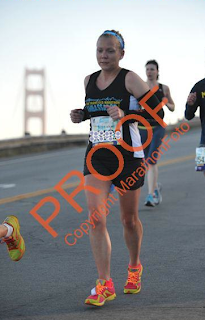 For the first time in a marathon, I covered my watch and let Jess and Dennis have all control. I was really freaked out at the idea of trusting them this much, but it was nice to hand over the stress. At one point I heard Dennis mention we were going too fast, but Jess quickly smacked him & told me we were perfect. We had the hills up to the Bridge/through the Sea Cliff neighborhood next, and we'd slow it there. 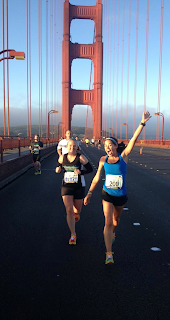 How amazing is this photo of Dennis? See Jess' foot up ahead (typical) and me behind Dennis. 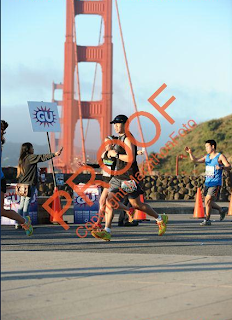 One of the many stink faces I inadvertently gave Dennis. ;) 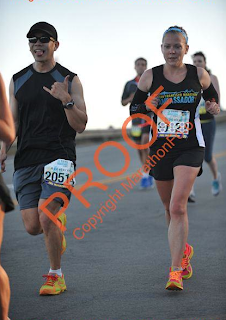 I hit my first low point right around the 11-mile mark, which I was not expecting. We were running in the neighborhood where I live and I not-so-jokingly-but-completely-jokingly said I wanted to go home. I just put my head down and tried to keep up with them but I saw them get farther and farther ahead (never were they more than 100 feet ahead of me, but it felt like city blocks!). I had many thoughts of dropping down to the half marathon once we got to the park. Jess kept telling me we could slow down if I wanted, but I did my best to soldier on. I am not sure why I was feeling so crappy so early on because I was taking in GU every 5 miles, a cup of water at each water stop, and (thanks to a recent virus) I had a long taper & my legs were fresh.


Entering the park behind the ever-photogenic Jess 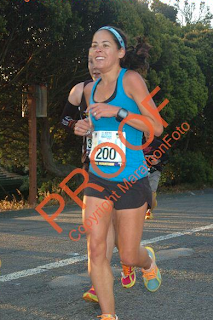 We made our way through Golden Gate Park, which is awesome for training but not awesome for racing. Going from the noise and the honking cars and the cheering on the Bridge, the Park felt so quiet and very isolating. There were barely any runners around as many turned off toward the half marathon split. At this point, I realized my stomach was not liking the GU I had been taking (this is something I'll discuss when talking about the Hanson's method later -- without a lot of long runs, I had NOT adequately practiced fueling), and I knew I'd have to make a pit stop. I also knew my stomach would not be tolerating any more GU during the race. I told Jess and Dennis to continue on because I knew I'd hit the pain cave without taking any more fuel options. They told me to stop being ridiculous: "Team Awesome stays together." 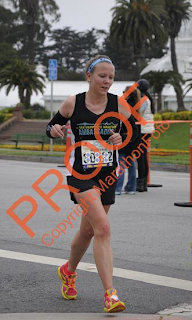 WE ALMOST ALL MADE IT INTO A PICTURE TOGETHER!!
(aka Ninja Gate that jumped out at Dennis) 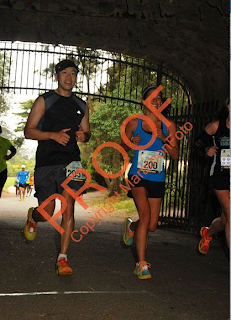 After the port-o-potty stop, I felt GOD DAMN AWESOME. We bolted through the remaining portion of the park, and into the lonelier miles of the race. For me, I actually had a lot to look forward to on the "boring" part of the course. A friendly face would be at mile 21 to hand me my sunglasses and take my arm sleeves, Mile 23 has one of the greatest and loudest cheer stations (thanks, Lululemon!), and my morning run buddy Charlotte would be at mile 25 cheering with Strava. Team Awesome kept reminding me of the small things to look forward ahead of me, and we pressed on. 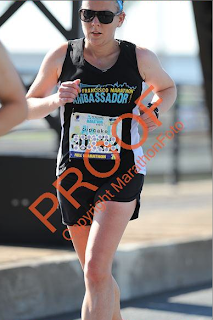 I felt like I was SLOGGING on all my final miles, and Jess & Dennis kept yelling "Come on, A!" as they pushed on. I still never looked at my watch as it was turned upside down once I took off my arm sleeves, but I felt tired. Dennis shared his Chomps with me, and Jess grabbed me orange and watermelon slices on the course -- stomaching those items was so much better than the GU. I never felt any muscle-cramping-I-wanna-die sort of tired; I just felt like I had nothing left in me. Jess & Dennis were trying to make up for lost time that I took from the pit stop which was appreciated, but I had no idea how far off we were. I just tried to hang on to them. 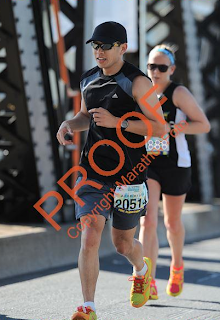 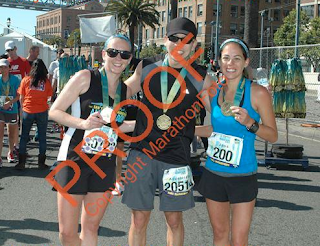 Post-race thoughts
Given the hills on the course, I'm pleasantly surprised with the consistent pace we held. This is especially true for the very end of the race. The last 10k are some of the least scenic/sunniest/no shade/smelly water part of the race where I generally fall apart. I'm realizing that it does take me a long time to warm up these days, and in this case, it actually worked to my advantage. My last 10k was my fastest stretch of the race. I didn't feel like I was moving quickly, but clearly my body was able to press on through the pain.

This was also my most favorite favorite favorite running of a marathon EVER. After 13 of them, this will be hard to top! I already love the San Francisco Marathon SO MUCH -- it's a great weekend full of energy, organization, and really friendly people/sites. Getting to run this race with two friends who pushed me only made it that much better. I really appreciated everything they said and did to make my experience a completely unique one.

While I may have missed my "goal" by a minute, it seriously does not even matter one iota to me. I feel more confident in my running, my energy is boosted, and I have a newly discovered hope that maybe someday soon I'll be able to run a fast road race on the right course. I don't feel burned out going into the fall race season -- I feel rejuvenated. If I can do this one without a whole hell of a lot of fast or long running, I wonder what I could do when I add a little more of that back in.

BUT, I'm still not ready to give up my slow weekday trail miles with friends. Not yet anyway. :)

Thank you, SFM & Team Awesome, for an amazing weekend! 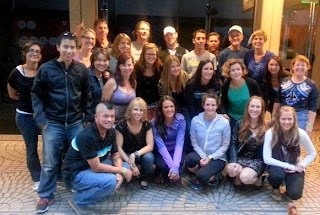