A brief catch-up
A lot has happened since I stopped posting content to my blog in 2013:

After some logistical changes re: transportation & pacers a few weeks before the race, things settled into place the week of. Saturday morning of the run, I parked my car at the finish line & took the 4:10am shuttle to the start. This was a great option instead of having to wait for the one evening shuttle back to the starting parking lot, but with a few friends and a couple cars around (my original plan), one wouldn't need to take the shuttle at all. For those traveling solo, I highly recommend the morning shuttle option. Parking at the finish made for an earrrrrlllyy morning, but well worth it to know I was free to leave whenever afterward. (Or, conversely, not missing the one evening shuttle if I was out on the course for a long time.)

The shuttle got to the start around 5am, an hour before the first wave went out, but NorCalUltras set up a tent to shield runners from the wind and huddle together for warmth. I did my best to get a few moments of shut-eye in the hospitality tent, but the energy was too high. Runners are the only talkative pre-sunrise bunch I know! 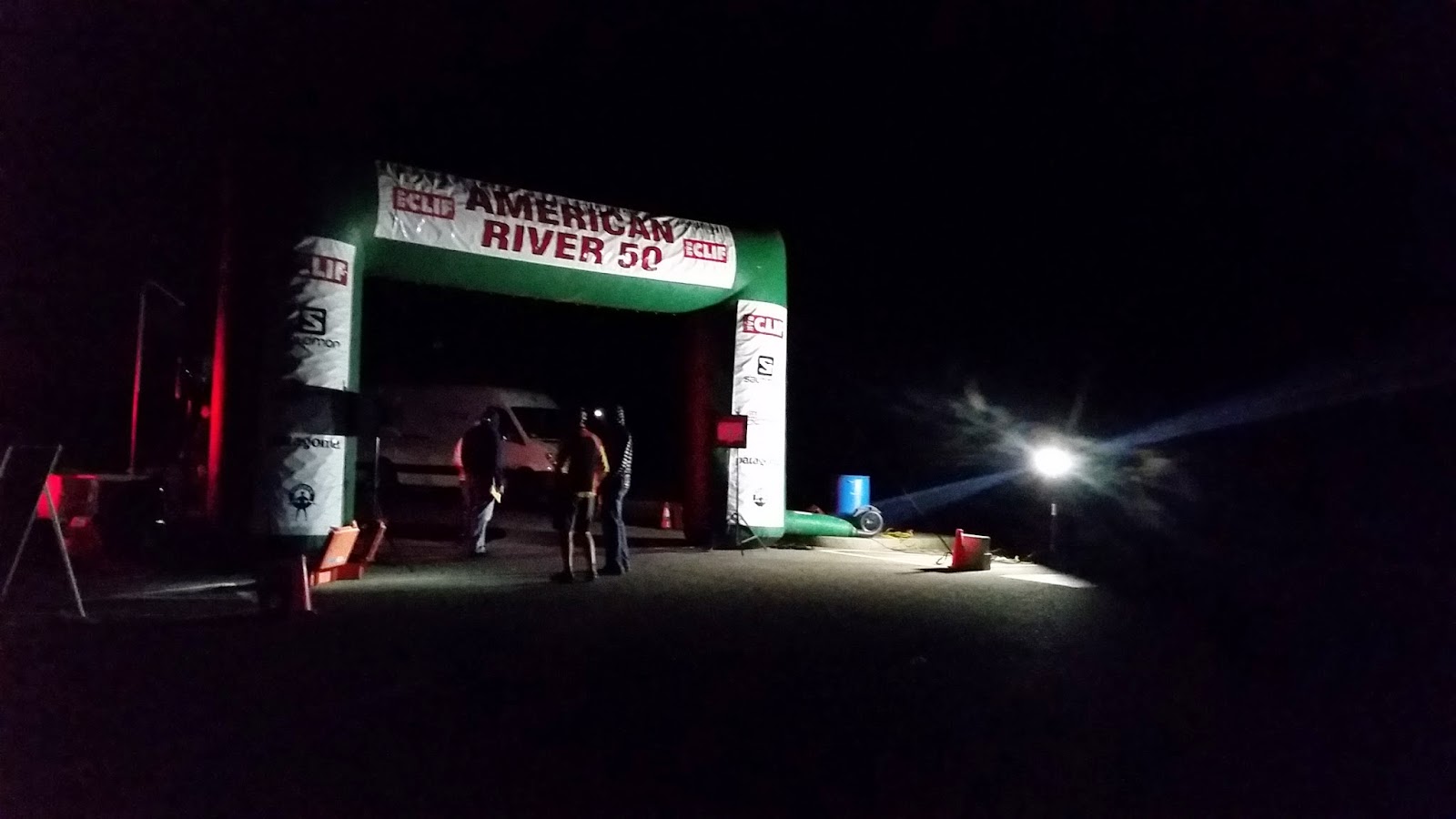 Miles 0-15
The new AR50 course supposedly has more trails in the first half than the old course, but honestly it was still a lot of bike path; wayyyy more than I was anticipating. It started with a mile of roadway, then hopped onto singletrack for a couple miles. It was very dark and we all had headlamps, but it made for a harrowing start. Relying entirely on headlamps can be a little straining on the eyes when you're trying not to trip on roots, rocks, & other people's feet while everyone is locked in pace. Before long, the sun was up, we were on a bike path watching the blood moon lunar eclipse, and 50 miles was scooting by!

Because of the public bike path, I had a hard time settling into a groove. For a while we were running right next to a highway, and who loves the smell of exhaust first thing in the morning? A few cyclists gave us a mouthful for being on the path, and the path was still open to public walkers, joggers, and dogs on long leashes. All is fine and well -- it's a wonderful outdoor resource for everyone -- but it was a little hard to get into the feel of running a race when I was switching lanes to accommodate everyone else out.

Miles 15-30
Around mile 16, Alisyn spotted me. She was out running with her dog & screamed my name. Seeing her was a nice boost to get out of my head and talk out loud to someone. I remember telling her I felt like I was waiting to feel good. Around mile 22, the race exited the bike path and got back back onto trail for the remainder of the race. By then I was feeling more "in it" because the public wasn't out & we more or less had all the beautiful singletrack to ourselves. So crazy that it took me nearly 22 miles to warm up.

At mile 24, I picked up my first pacer, Jana. She was there with her entourage, who also ended up being my cheerleaders for the remainder of the race; Tate, Leonard, Christian, & Luke. I asked her to be ready to run with me if I felt like I wanted company. Luckily Jana was up for it & I was feeling good & social by then, so she willingly ran beside me for an hour. I felt GREAT those miles and they flew right by. (Sidenote: Jana paced me to an unofficial 50k PR at AR50!) 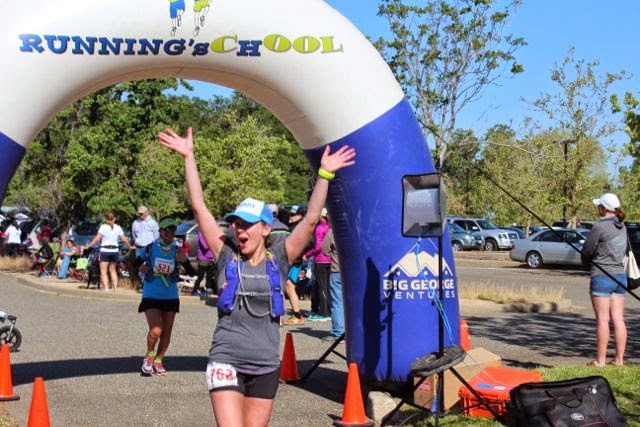 Picking up Jana for a jaunt 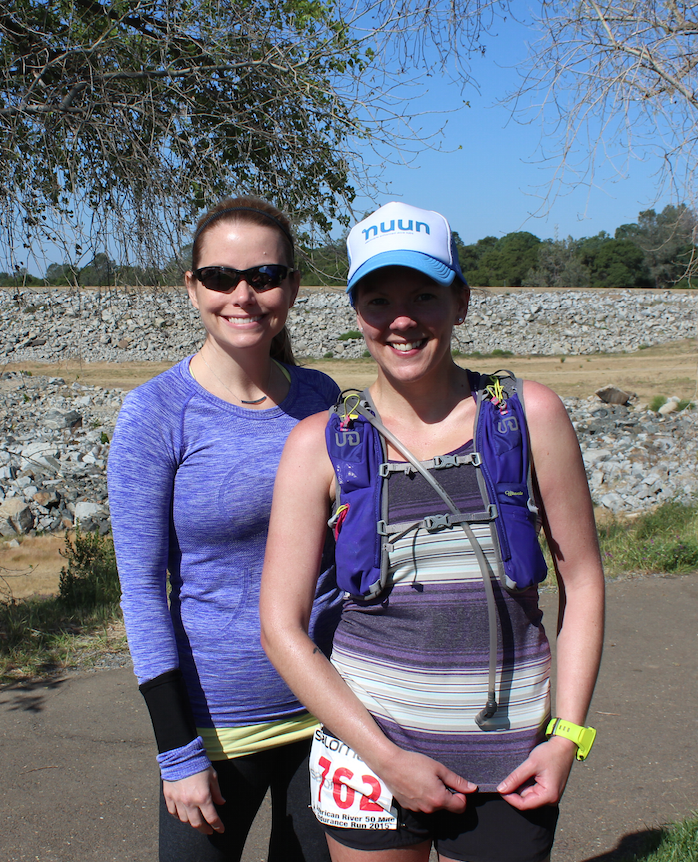 By the halfway point it was starting to get really hot. I didn't check the temperature, but I'm guessing it was close to 80F (hot for this SF gal!), but luckily really dry. I brought a change of clothes/socks/shoes at the halfway-point dropbag in case I wanted to change, but stripping into the tank top I had under my t-shirt was adequate.

Jana grabbed this snap at mile 27 -- a pacer AND photographer! 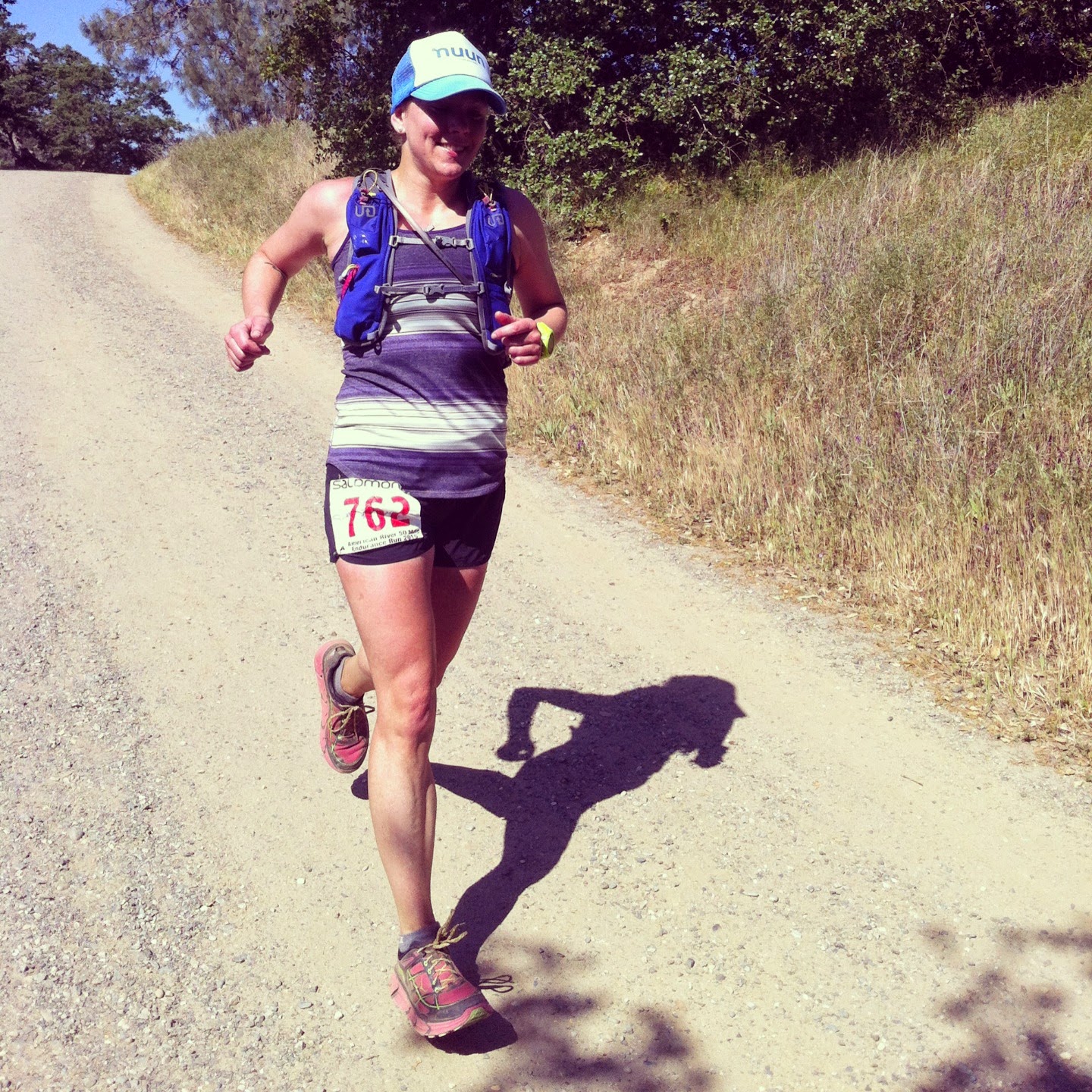 Miles 30-40
At mile 30, I picked up my morning run buddy and second pacer for the day, Charlotte. Charlotte is the queen of ultramarathons and one of my idols. I really look up to her, all she has accomplished, and relied heavily on her for advice during training. I'm so honored she was willing to jump in with just a few weeks of notice and run 20 miles with me!

As the queen, Charlotte was a great resource to have in my first looooong distance run. She enthusiastically jumped in and asked me about my fueling & hydrating, TOUCHED MY DISGUSTING FOOT TO APPLY MOLESKIN, took my hydration pack and refilled it without prompting, and bless her heart, carried a party favor noisemaker for 20 miles to keep things light and fun. Every time I slowed to a hiking pace, magical Charlotte pulled out a magical Jolly Rancher from her pocket and would say "time for a snack!" She listened to me without me having to say much, and that kind of experience only comes from having done many of these races herself. 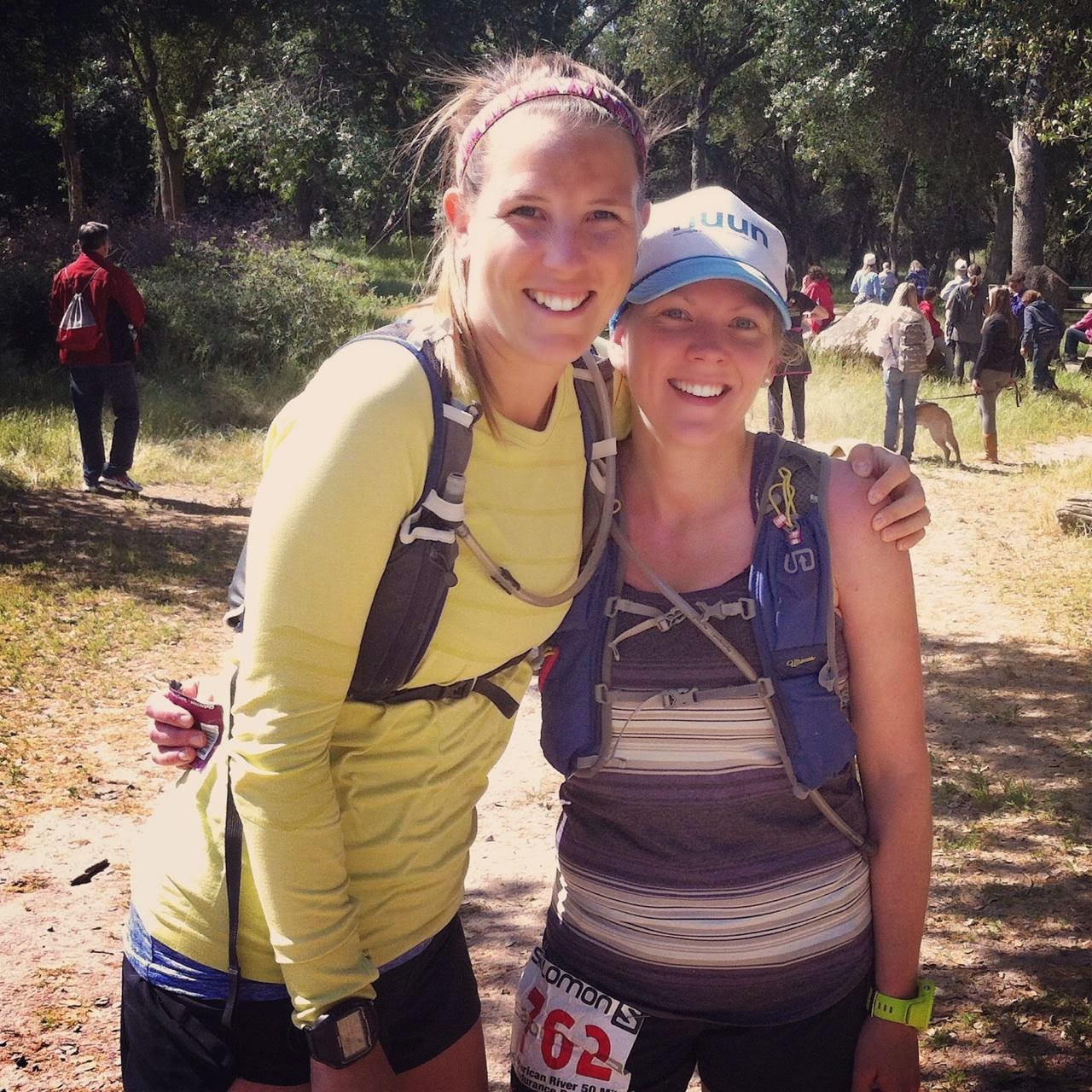 Normally I run with Charlotte a couple times a week, but because of taper/vacations/crazy schedules, we hadn't seen each other in a few weeks. We had so much to catch up on! I felt like we were running together for HOURS, talking about life & trips & jobs & families, and when I looked down at my watch, we were at mile 33. I felt pretty deflated at that point -- I thought we were closer to the mile 40 aid station when really we had barely gone anywhere! This was maybe the lowest mental point I had in the race -- it was my new distance PR, but there was so much work to do. (I also learned at this point my GPS reading was off by almost 1.5 miles, so it helped things a little knowing we were farther than my watch said.)

Right after that mental low point, I had a bit of a physical low point. Both my little toes had become blisters that I felt coming on, but when they popped some steps became painful on the jagged rocks. My legs felt heavy & I had a hard time picking up my feet. I'd keep shuffling and skidding over roots (so surprised I didn't trip!). During the "meat grinder" section of the race -- steep natural steps of technical roots/rocks both uphill and downhill -- I was feeling the worst & ended up using that time to hike forward. It was pretty exposed and dusty, so my mantra was to keep moving ahead at whatever pace I could.

Miles 40-50
At mile 40, my best friends Cate, Mike, & their daughter Ellie, as well as Jana & her family, were back to cheer with signs and cowbells. It was The Best Feeling Ever to see all of their faces in one place with Charlotte by my side. Friends for life! I took a few minutes to take a baby-wipe bath, reapply sunscreen, and get photos with my cheerleaders. The short break provided wonders for getting my head back into the game. There were 10 miles ahead of me with a 4-mile uphill chunk at the very end. I mentally told myself I'd be hiking that incline anyway, so I was able to convince myself I could trot a 10k followed by a hike. Easy, right? ;) 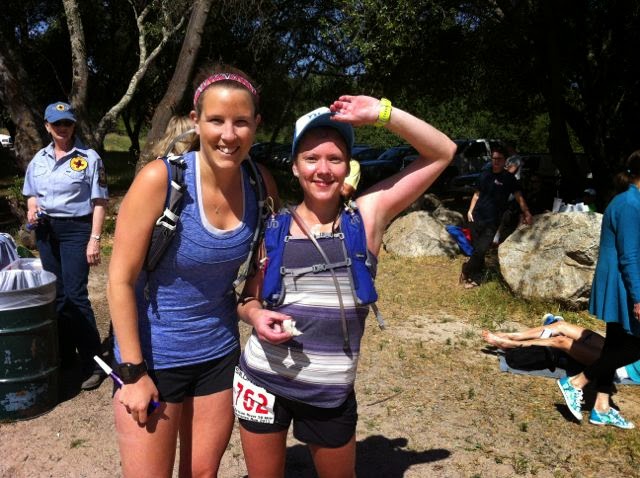 Even though I fueled with Honey Stinger Chews, Nuun, boiled potatoes + salt, & orange slices throughout the entire race, I don't think I ate anything those last 10 miles. I was trying to take in the scenery as best I could and taste the finish line instead of more sugar in my guts. The uphill section at the end was hard & I feel like I walked most of it, but looking back at my splits I see I was doing 11-minute miles or so... I was not feeling like I was moving that fast up a mountain. I basically trotted along where I could, even if it was just for a few minutes at a time.


Strava or it didn't happen

I felt like I had very little left in the tank, but overall I'm surprised I wasn't feeling worse throughout the race. I think I was waiting for that wall we feel in marathons -- or even a few of those walls -- but that depressing feeling of impossibility never hit. Instead it was more just a feeling of running on fumes.

Coming into the finish chute was the most joyous finish line I've ever gone through. It wasn't packed with people like a traditional road race, but every single of those few people in that chute was cheering for me specifically, slapping high-fives, shooting water guns, & taking pictures. It was one of the happiest finishes I've ever had. 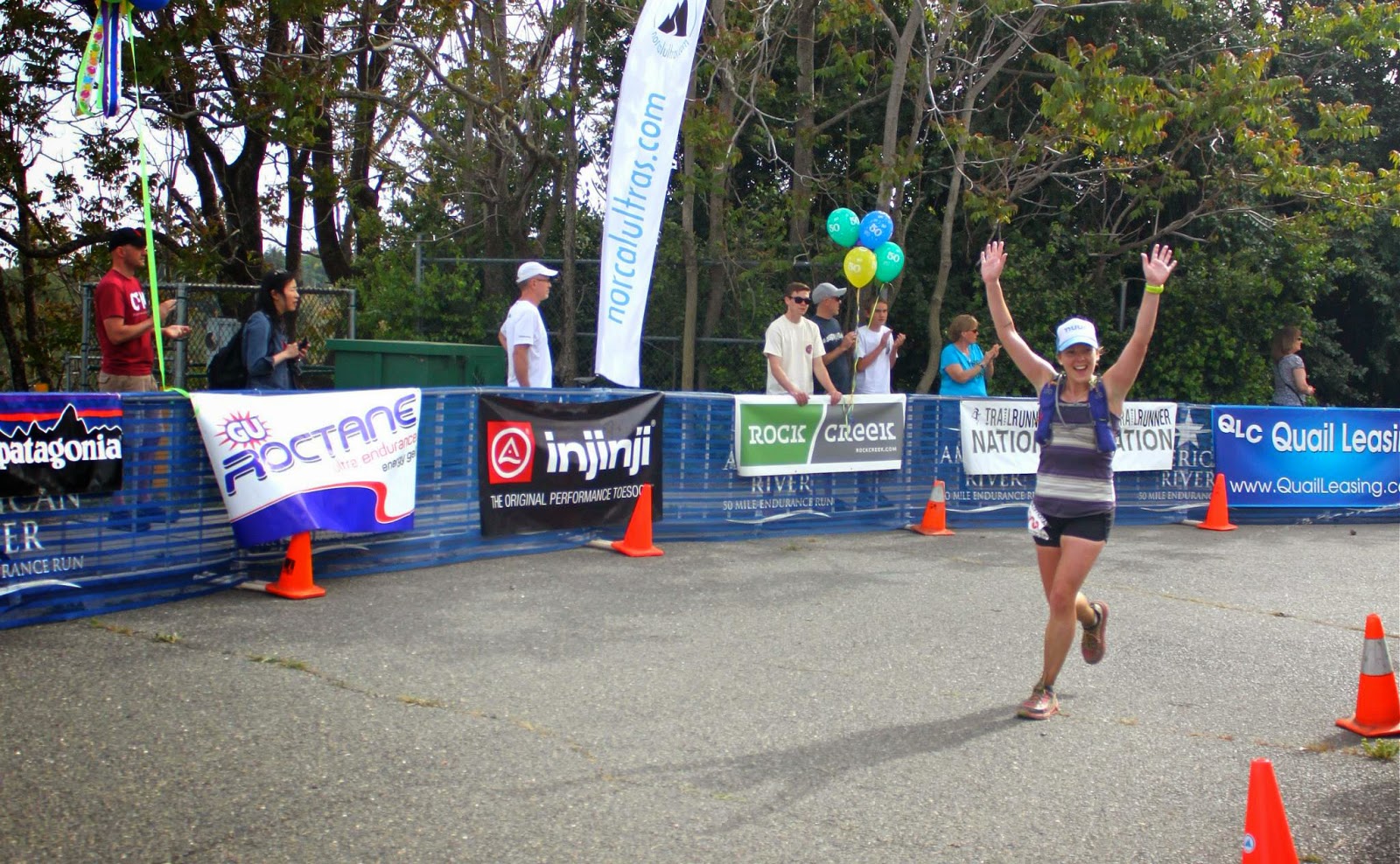 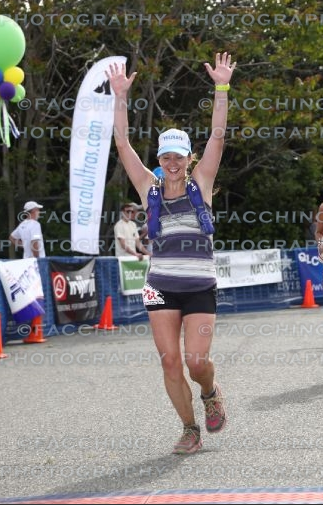 Takeaways
Of all the runners I chatted with during the race, it inevitably came out that this was my first 50. The amount of times I heard "For your first 50, YOU ARE KILLING IT" was innumerable. What was so odd about this was that I most definitely did NOT feel like I was doing anything spectacular. Quite the opposite, actually. It felt like a slow plod forward, slogging through where I could. The 50 miler was quite a different game than attempting to charge through a marathon with reserves to spare.

My official finish time was 10:14:07 -- a time I'm so proud of. I went in with no expectations or goals other than to finish, and I'm stunned it didn't take me much longer!

Annnnd, of course, the inevitable question: Will I do another? I'm not feeling a huge need to as of right now, but never say never.


Me & my beautiful pacers, Jana & Charlotte 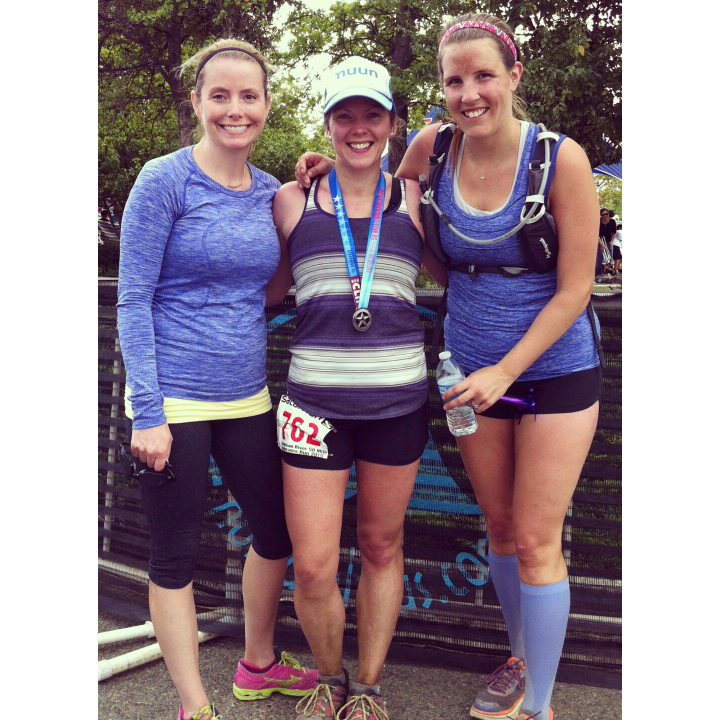 The best aid station, on-course, and finish line cheerleaders in All The Land. 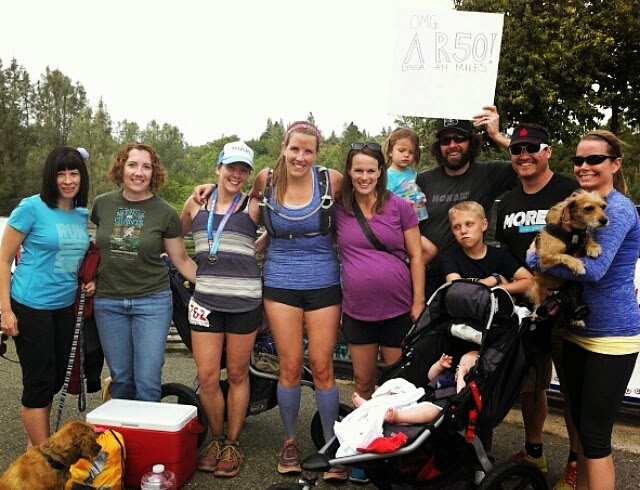