When so many of my Bay Area friends signed up for this race, it took no time at all for me to be convinced to join. I had never run Lake Chabot, I could stand to use more miles on the trails, and any reason to see friends is a good enough one for me.

I ran the first two miles or so on my own, until I caught up with Kim, a friend of Aron's. What started with a few basic life questions turned into 16 more miles of truly great company. As Aron always says, "To really get to know someone, do a long run with them." Kim & I really connected on this scenic trail run, and we had a great day chatting, hiking, and having a good time. She is training for a 50 miler & I got to pick her brain a bit about ultras. It was a lot of fun!

Kim & me approaching an aid station. 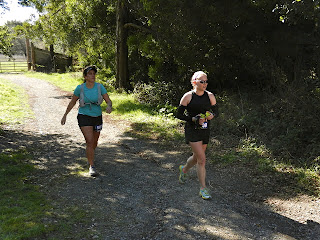 At the top peak, we could see the Bay (way in the distance) and hills forever. 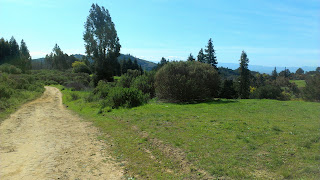 Funny. I am missing a picture of Lake Chabot. I swear it was there.

Friends in the sun! 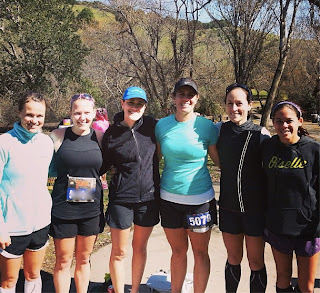 A few months ago, Alisyn won an entry into an inaugural race just south of San Francisco. She had tried to convince a few people to join her, but after looking at the website and seeing how disorganized it was & how many details were missing, I wasn't sold. I planned on doing my second long run on my own & save my hard-earned dough instead, until about 6pm Saturday night... I decided I would give it a shot & join Alisyn for my second long run of the weekend. I signed up for this inaugural race despite not even knowing where the starting line was (yes, those kinds of details were missing), and let me say, I am SO glad I did it!

Lake Chabot was fun and a great challenge, but the San Bruno Mountain half marathon was another story. It had the same amount of climbing in 13 miles as we did in 18 miles the day before. That phrase "what goes up must come down" definitely did not apply to this race. I don't know how this race director did it, but we had us running various routes around the San Bruno Mountain State Park, and somehow made the course nearly entirely uphill. What downhills we did have were so steep they were nearly unrunnable and completely unrelenting.

But, despite my slow pace, I charged up almost every hill on the course & had a really great confidence-boosting race, especially coming off a challenging run the day before.

This was the biggest downhill we had. It's hard to tell from this angle, but people were trying not to tumble down toward the water. I slid a few feet a couple times and miraculously kept my balance -- it was so steep that it would have been easier to crab-crawl than walk. 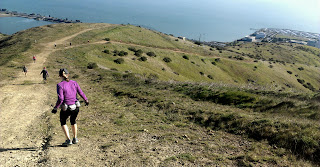 Then we turned around at the bottom & went back up for endless climbing toward the finish. 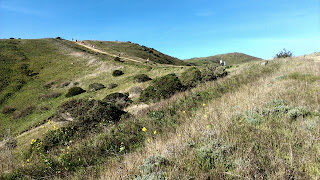 The hills were hard, but the views did not suck. 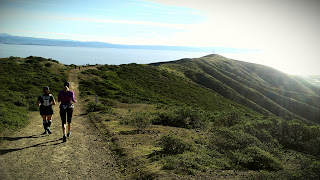 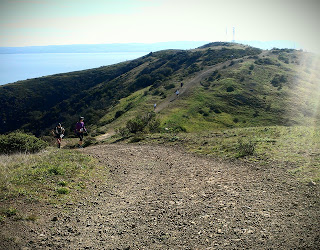 Alisyn, her friend Shannon & I all crossed the finish together! 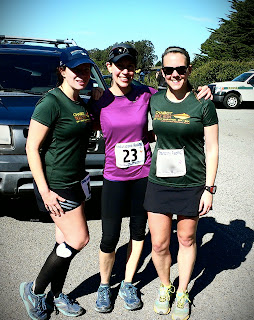 This race was wayyy harder than my longer race the day before, but I felt great the entire time. I'm so glad I went to do this race and when they hold it again next year, I'll be back. :)

Taper time!
With this past weekend of races, I now start tapering... although I'd be lying if I said I thought I deserved a taper. My back-to-backs didn't hit the miles I wanted to hit and I didn't do as many of them as I initially dreamed of doing. My overall weekly mileage numbers were low compared to what I usually run. I only did one 20-miler whereas I usually do a few more than that for a marathon. But, excuses aside, I did what I could given my gimpy hip, life/work/apartment changes, & everything else that seems to happen when you're alive & trying to live that life.

When I first penciled together my 50k training plan, I had big audacious goals: Back-to-backs every weekend! High-mileage weeks! Lots and lots of trail races! Hip pain that would magically disappear!

And then life intervened.

With a more-demanding job during the week, a commute, a tall gentleman that I spend my weekends with, and a naggy hip that I'm treating with caution, my lofty training plan is getting lots & lots of tweaks.

I'm okay with it. I am learning to find the balance I need on a daily basis. I think.

I've come to the realization that I'm training for a 50k... A slow 50k. Thanks to the affirmation from many of you, I know I don't need specific mileage or paces; I need time on my feet. I need more trail miles. And I probably don't need to have *much* more mileage than I would need to finish a marathon. (Again, this is my take on it, mostly because if I get to the start line of the 50k, I don't have any goals other than to make it to the finish line.)

In order to accommodate work, life, an upcoming move, friends, and my family, some of the unabashed huge weekends I had in my plan are disappearing. In fact, most of them are. I'll be doing at least one long run a week, but 3 back-to-back long runs should hopefully suffice in my 12-week plan. I consider my Pacifica Foothills 30k/11-mile trail run with Jojo one of them. This past weekend was another.

During the chipper hour of 5 a.m., a few of us drove down to Salinas, CA, to run in the first-ever foot race at the Fort Ord National Monument. Erin & I were running the 25k, and Jojo, Jess, and Aron were running the 50k.

Fort Ord was completely beautiful... I wish it were closer so I could run there more often! We were given notice a few days before that the 25k was actually closer to a 27 or 28k with a lot more climbing than originally planned, but it was no deterrent. Erin & I ran with the 50kers for about 10 miles before we split off for our final 7. We covered every terrain possible -- tree-covered "enchanted" forrests, single track switchbacks in what felt like a barren desert, sand that was reminiscent of running on a beach, miles and miles of open hills, and lots of climbing and descending. It was nice to constantly have a change of scenery and terrain every mile. The weather was ideal and I can't imagine a much better long run.


We dressed in 49ers colors the day before the Superbowl. Wah wah. 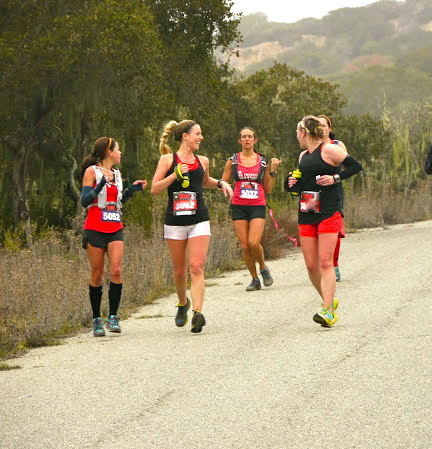 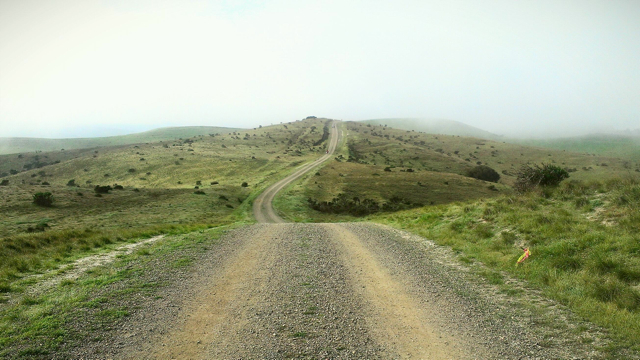 Rewarding views that come from climbing 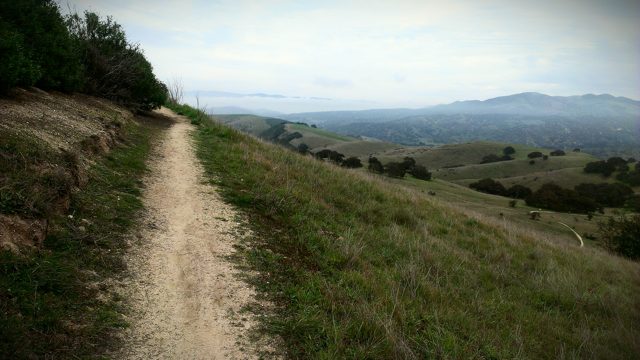 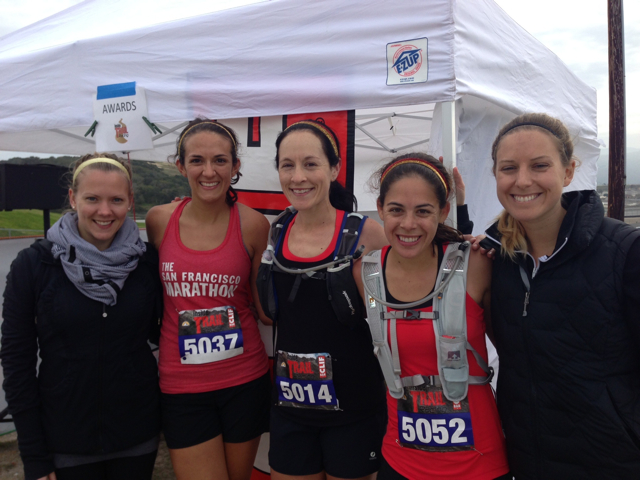 I definitely recommend this Inside Trails event -- the volunteers, organization, and route were all perfect & it was a great inaugural race.

Sunday: 18 miles, including the Kaiser Permanente Half Marathon

I don't have anything outstanding to note regarding this race compared to the one the day before, except that after 3+ hours of running (and 3+ hours standing/jumping around/cheering, AND 4+ hours of sitting in a car), I am surprised I pulled out 18 miles. I was definitely feeling tired and my legs felt heavy. By the end of my run, I had wonderful daydreams of eating an entire cake, but instead went home and took a nap. 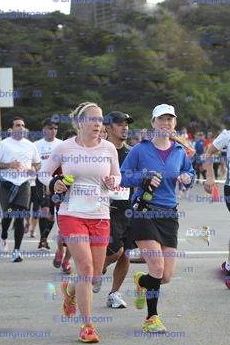 This is the third time I've run Kaiser -- and I guess it's become a bit of a tradition as I've done it every year I've lived here. Despite not giving it a solid write-up this year (or last... whoops), I actually really like this race. RhodyCo Productions mails your chip and bib so there's no need to waste time at an expo. The race itself starts at 8 a.m., so runners in the area don't have to get up too dreadfully early. The field is limited to about 5,000 half marathoners & the same for 5kers. I totally love that the race feels busy, but never crowded beyond the first mile.

This year was par for the course & a reminder of why I enjoy running Kaiser: Good February weather, great water stations & volunteer support, a decently flat course (seeing that it occurs in San Francisco), and the fact I can talk Courtney into jumping in and running with me for a few miles since it goes right by her house. Renee was also at mile 12 calling out splits, and I loved seeing her twice (as it was during an out & back portion) and it gave me a nice little boost. In previous years Kaiser has been a PR attempt for me; this year, with my bad hip & lack of speedwork, I secretly wanted to get a sub-2. Holding a 9:09 pace is something that has been a bit of a struggle for me lately, and especially after a hard run the day before.

This is fast for me these days? Yikes. 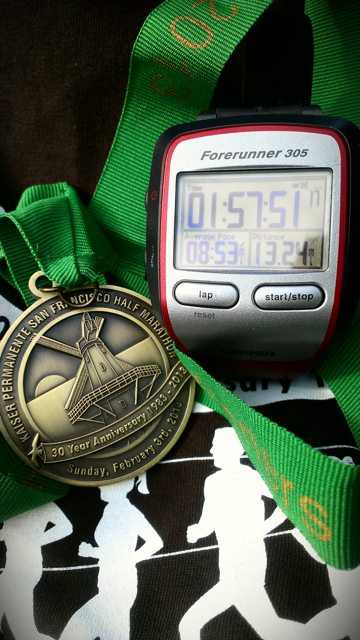 It'll be a few more weeks before I have time to do another solid back-to-back weekend, but I've got plenty more running to do in the meantime. I'm grateful my hip is holding up & I've managed to stay healthy.
Posted by Alyssa at 7:48:00 PM 29 comments: